A microwave heats the molecules in food directly through radiation. That radiation is a form of electromagnetic (EM) energy—waves of energy that travel through space.

There are different types of EM wave energy, from Ultraviolet (UV) rays that give us a suntan, to X-rays that we use to take a photo of our bones.

Scientists usually classify types of EM energy according to their wavelength on the electromagnetic spectrum. 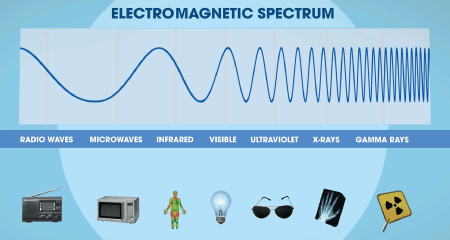 Wavelength is the distance between the peaks of two waves.

Sort the waves below according to their wavelength, from shortest to longest. You can click on the EM spectrum to enlarge the image.